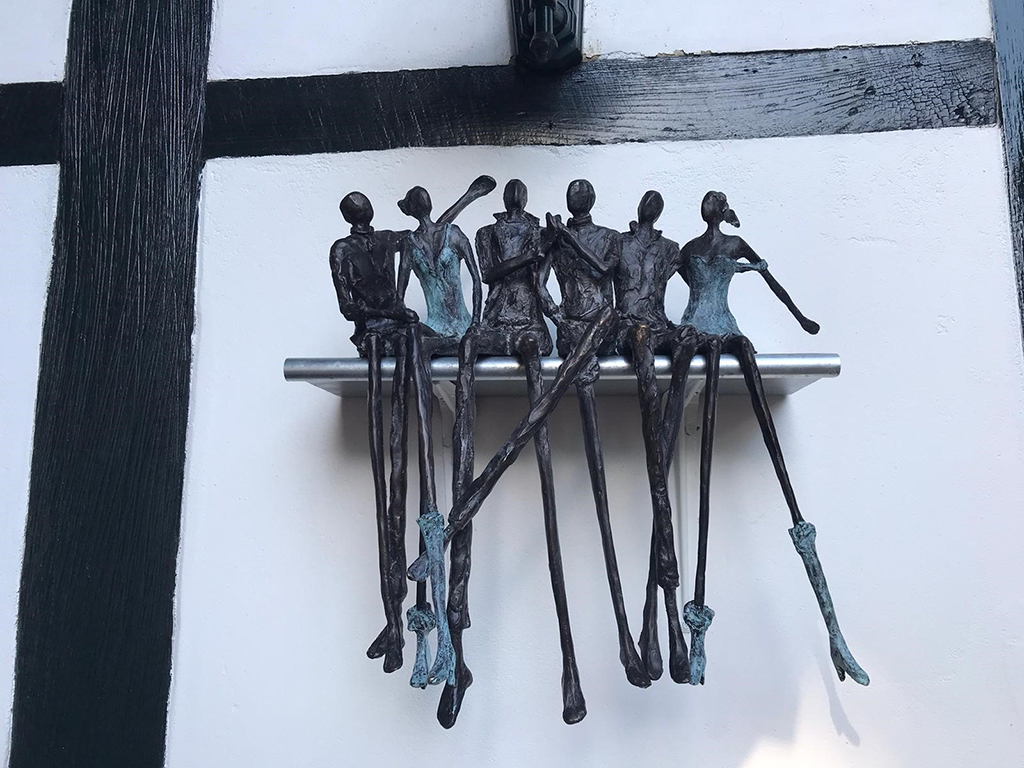 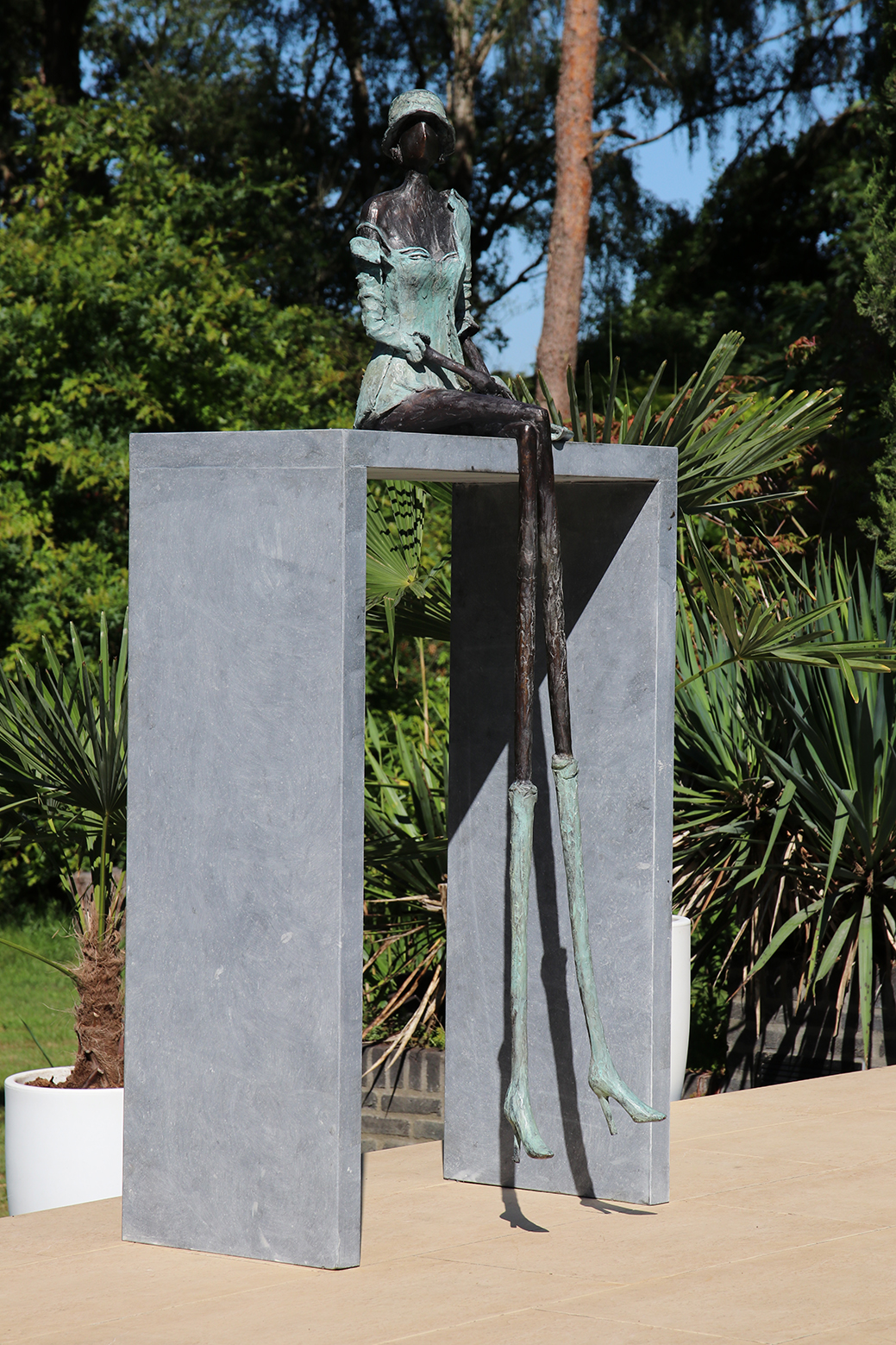 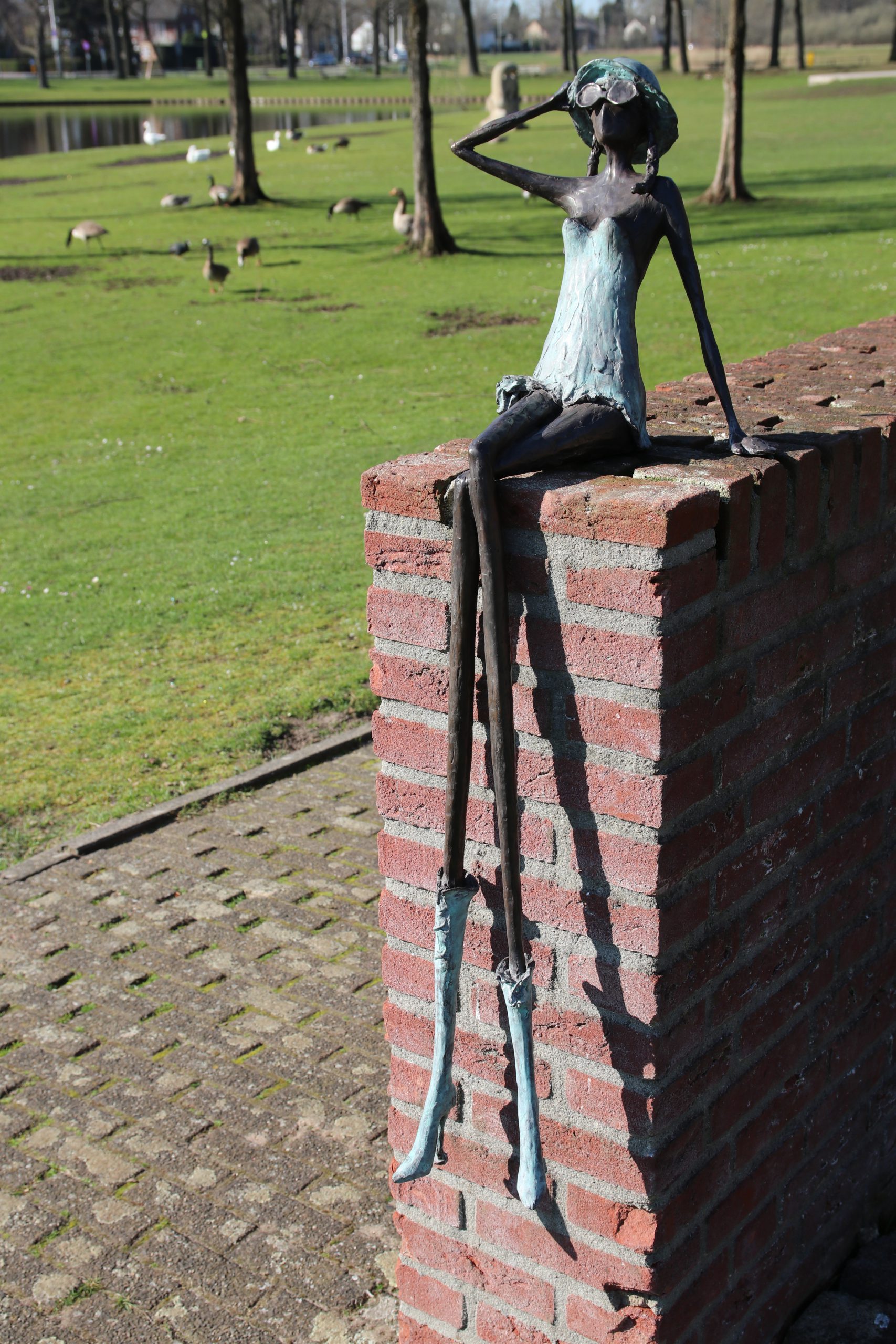 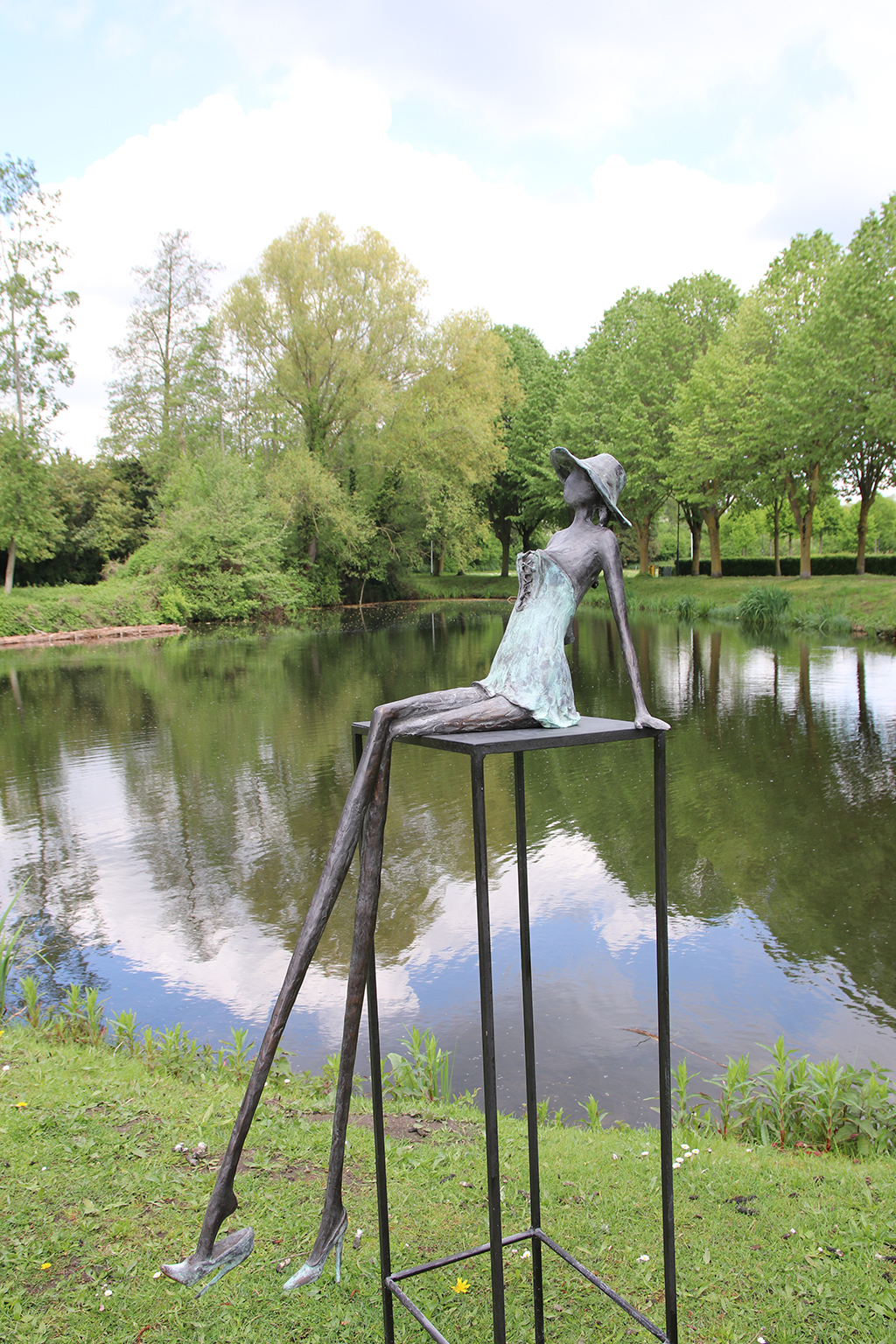 A moment of joyful reflection

The bronze garden sculptures created by Astrid Huisman-Biemans convey a distinctive outlook on life. This is revealed by the titles of the statues alone. ‘Hello Sunshine’ is one example: a figure of a woman in a summer dress with large sunglasses brazenly perched on her nose. ‘Elle est très belle!’, an almost life-size sculpture of a woman, is another. This is a statue that tells a story, as the woman seems to be about to depart. She has raised her head expectantly and is carrying a beautiful bag. Looking at the sculpture from the back, you notice her hair is in a lovely thick plait, confirming Huisman-Biemans’ artistic abilities. The sculpture is made of bronze and yet you feel like just reaching out and touching the plait because it looks so lifelike. This is a defining characteristic of her work. Huisman-Biemans makes robust and impressive statues that hold their own in any outdoor (or indoor) environment, while at the same time telling a subtle and personal story that is both entertaining and thought-provoking.

Her sculptures destined for an interior and her bronze garden statues never fail to make a lasting impression because of the sturdiness and elegance of their construction, combined with a host of unique, meticulously crafted details. Booties with laces, a large bag, either empty or full of belongings, a hairstyle, or a hat – all these elements come together to form a short narrative pointing to the idiosyncratic character depicted. A dialogue is created between the sculpture and the person contemplating it, and also between the statue and its environment. What is on the mind of that girl stretching out her legs in such a frivolous way? What is that regal woman wearing all those summer hats dreaming of? What is she doing here, in this garden? Huisman-Biemans’ bronze statues exude power and joy. They are redolent of casual introspection, something that is wonderfully appropriate in that sunny or shady spot in the garden, or in a stylish interior. A sculpture has the ability to surprise anyone suddenly stumbling across it among the greenery, and the longer you look at one, the more details you discover.

Integration into the garden landscape

It is worth examining what components Huisman-Biemans’ style consists of and why her bronze garden statues fit so well into an outdoor setting. This is not only down to the optimistic character of the figures but also derives from the spatial effect created by legs and arms, which form long lines, implying progress and strength. The legs carry the body. In a metaphorical sense, they represent the continuity of thought and life too. Another factor is the elegant design of the sculptures, something that works extremely well in a garden concept.

Perhaps this stems from the nod the artist gives to Japan. The Japanese philosophy of life, which is often a combination of Buddhism and Shintoism, is somewhat similar to her own. Buddhism involves an element of acceptance, which makes the pursuit of life force a normality. Shintoism is the ancient and traditional religion of Japan in which natural forces play a major role. That reverence for stillness and natural sounds, for temporary beauty and enduring power is reflected in Japanese garden culture. Without claiming that Huisman-Biemans has studied Zen in any great detail, it is fair to say that she admires Japanese culture. One way this is evidenced is through her interest in a remarkable Japanese drawing technique. Sumi-e uses ink to combine simplicity with concentration. The artist’s wholly individual and contemporary bronze garden statues invariably blend in very well with their surroundings.

The cohesive balance of her compositions reveals the fact that Huisman-Biemans was professionally trained in art. The clear way in which the long lines are drawn tends towards abstraction, one of the characteristics of modern art. ‘Dearness’, for example, is a statue of six men and women, sitting next to each other, and with their arms around each other . You see them as individuals but at the same time, they form one silhouette. In each of her sculptures, Huisman-Biemans captures one specific moment, and it is this that creates the illusion of movement. It is a moment of expectation still to be fulfilled. Huisman-Biemans’ work looks classical, but at its core is contemporary.

Huisman-Biemans chooses to cast her garden statues in classic bronze. This is a strong, durable material and so ideal for artworks that will be outside in all weather. In indoor settings, bronze contrasts nicely with furniture and decorated walls. But what is more important to an artist is the way in which the medium – the bronze itself – can be fashioned. Huisman-Biemans plays with the different options for patination and generally her bronze garden statues have a dark, matt patina. In contrast, the details of garments and attributes, such as high-heeled shoes or gloves, are given a lighter patina in light green with traces of white. As a result, the details of the carefully considered and sensitively designed figures become tangible and visible. The plait in ‘Elle est très belle!’, the pleats in a skirt, or the thumbprint on the bare back of ‘Sunny Girl’ as she allows the shoulder straps of her dress to hang down – they all seem so lifelike. You just want to reach out and touch them.

Other types of work and other materials

Alongside bronze figures and garden statues, Huisman-Biemans produces other artworks, including drawings, also using the sumi-e technique. This results in drawings with sharp outlines and a powerful impact. Huisman-Biemans’ ink drawings are generally produced as independent works of art, though her sculptural work is reflected in them. She sketches characters and situations confidently and with a wealth of feeling.

While black lines predominate in most of Huisman-Biemans’ drawings, she does also employ colour. This is especially evident in her mixed media work (mixed media on Dibond with Plexiglas). These works are a combination of collage techniques and calligraphy. In her inimitable style, Huisman-Biemans depicts situations full of cheerful, agile characters. The works exude energy and a zest for life.

Astrid Huisman-Biemans also makes bespoke sculptures, incorporating the client’s personal stories into them. Commissioned works are also carefully blended into the environment in which they will come to stand. All in all, this is a very special process that can result in an unforgettable work of art for your home or office.