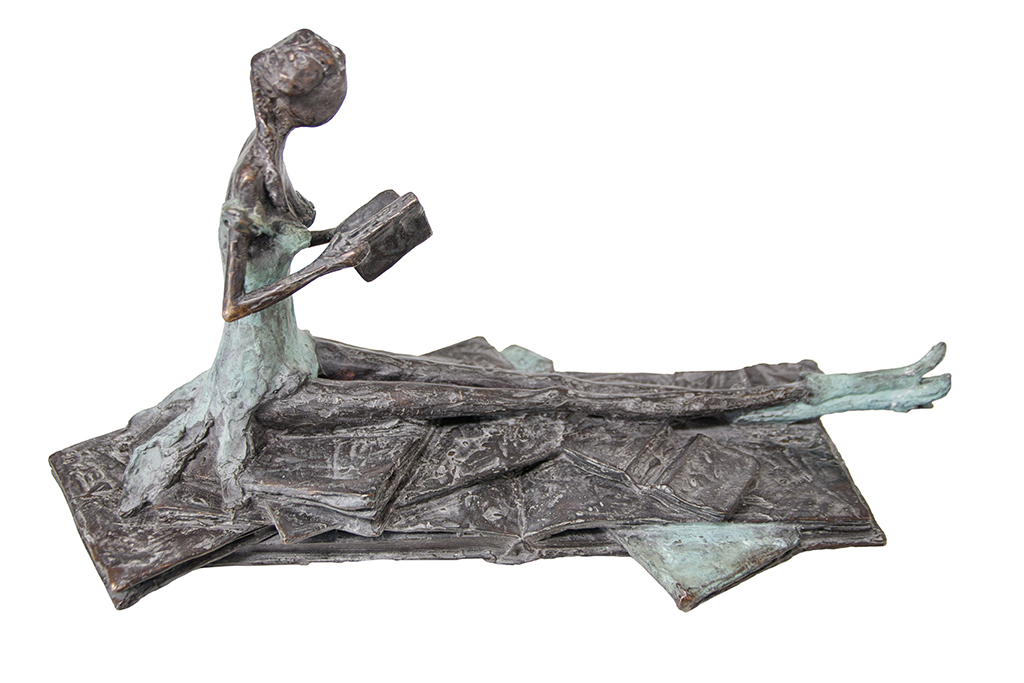 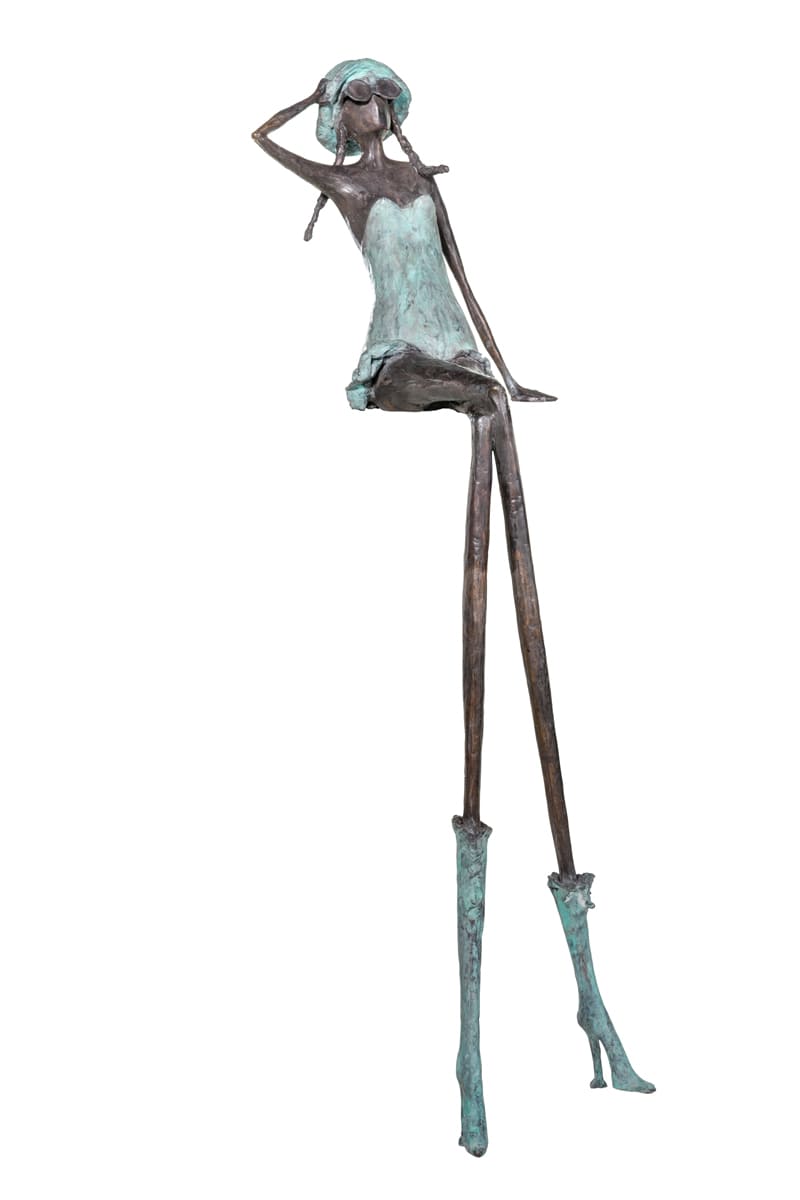 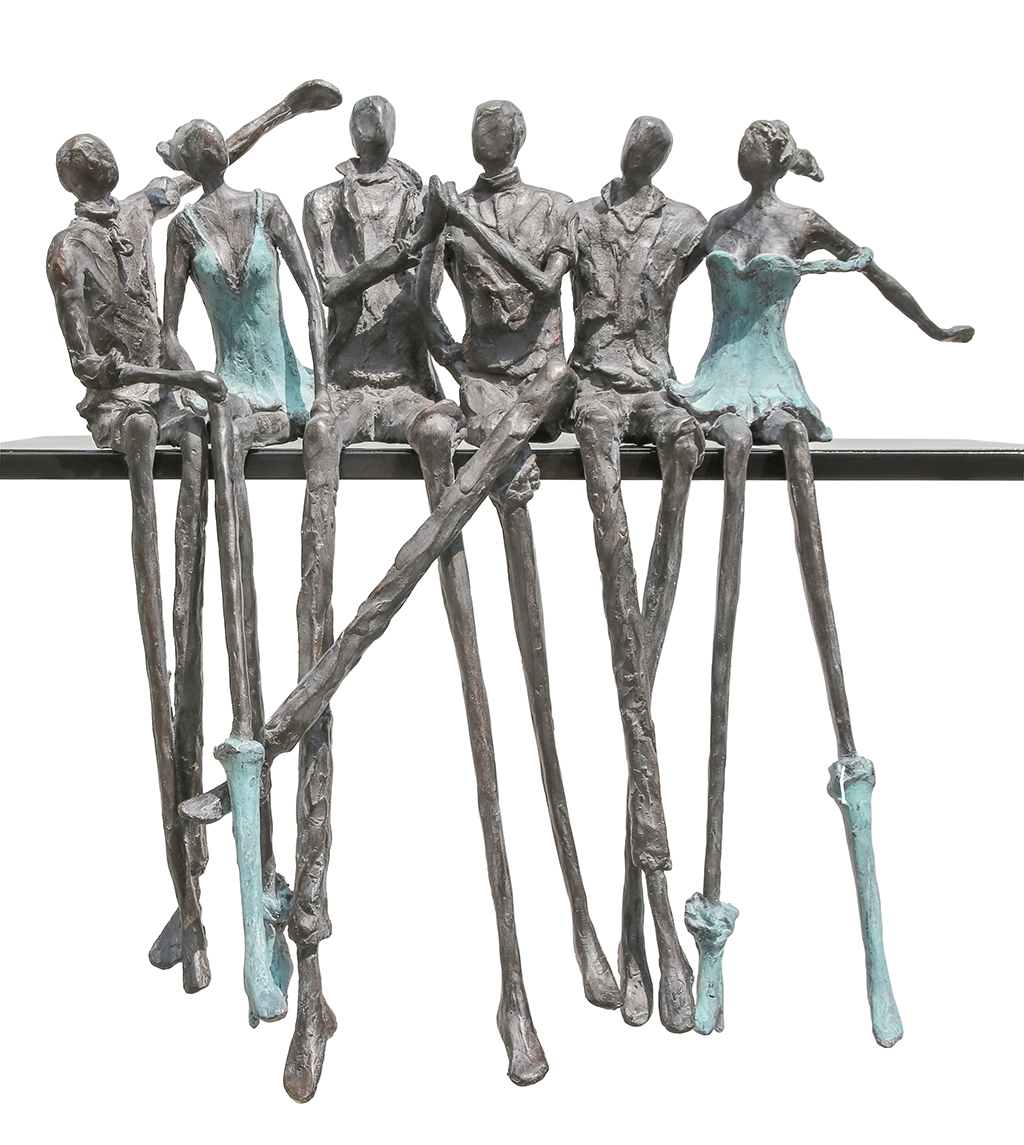 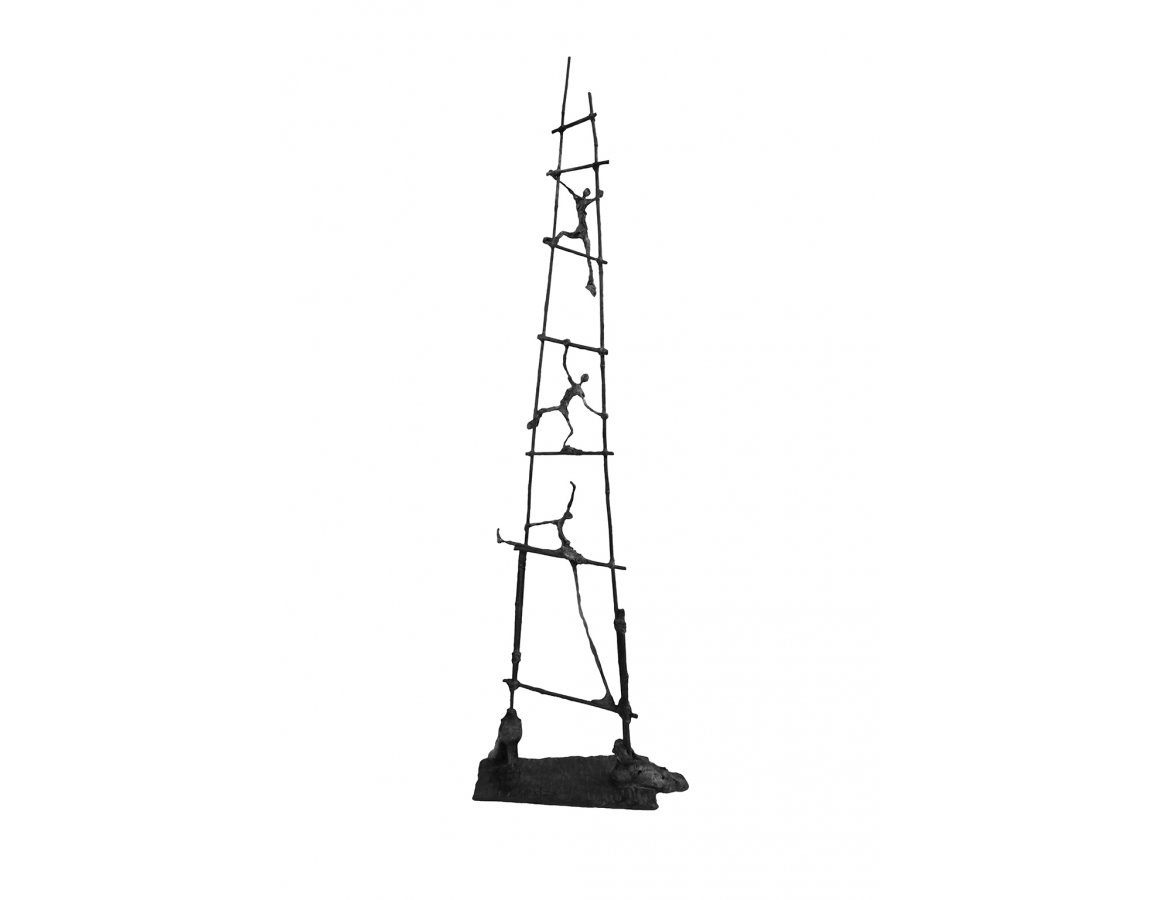 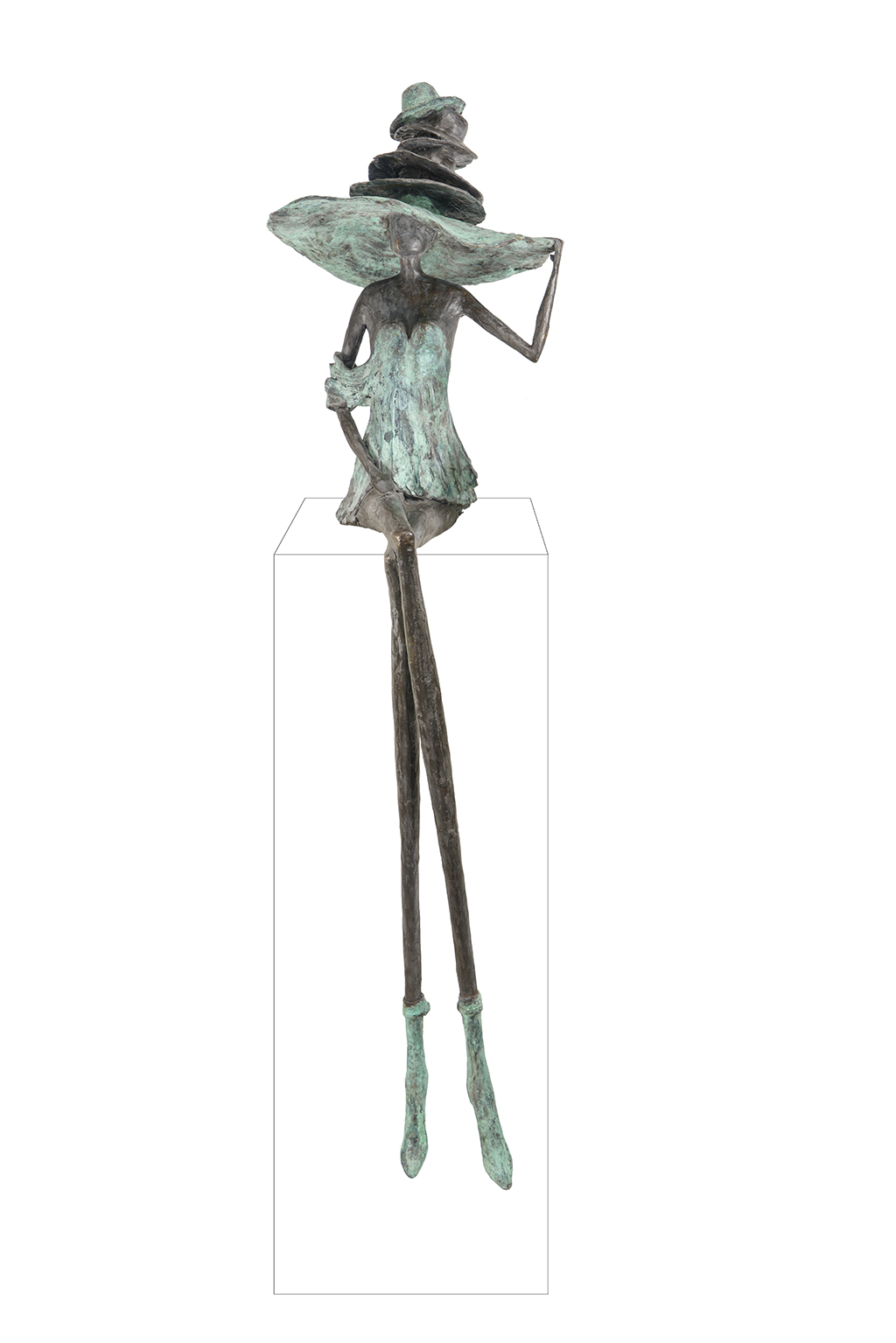 A moment of joyful reflection

One of the bronze statues created by Astrid Huisman-Biemans (AHB) is entitled ´Go with the flow’, another ‘Hello Sunshine’. While perfectly reflecting the lively character of these sculptures, the titles also reveal that the artist at work has an individualistic creative identity, along with an interest in people. Huisman-Biemans produces stylish and highly expressive figures of women and girls, characterised by long, elegant legs and a whole host of small details found in their clothing and gestures. It is not that men do not feature at all, but the specific characteristics of the female figures are what define this artist’s oeuvre and signature style. The atmosphere emanating from each individual sculpture reflects the personality of the character depicted. The figures are introspective and perhaps even a little on the serious side but – bearing the positive impact of the titles in mind too – there is a lightness of touch at the same time. Life is being embraced. It is these special qualities that make it a joy to have Huisman-Biemans’ sculptures around you.

The long lines in ‘Top hat’ and ‘Sunny girl’ ensure that these bronze sculptures make a particular impression. The lines inform the spatial design of the figures and are combined with a whole host of unique, meticulously crafted details. These range from body language in various forms and the way a character crosses her long legs or uses her hand to gesture, to attributes, such as a handbag full of belongings. Small, familiar and meaningful details are effortlessly combined with features expressing movement and abstract elements. The details and lines come together to form a strong composition, ultimately resulting in a fascinating scene.

Wherever Huisman-Biemans’ sculptures are positioned – in the living room or hallway where they become part of the interior, or in the garden, surrounded by greenery and foliage – her bronze figures are something you will never tire of. They will always serve to inspire a moment of joyful reflection. What is on the mind of that girl stretching out her legs in such a frivolous way? What is that regal woman wearing a summer hat dreaming of? The hairstyle and boots, that sock falling down just a little, the umbrella … everything is part of the entertaining story being told.

A zest for life and a hint of Zen

It is worth examining the components that make up Huisman-Biemans’ style. If we start with her bronze sculptures, then what we notice first are those long, nimble legs. They form clear lines that seem almost drawn. And so they also dictate the form. The long legs are also important in terms of the sculpture’s meaning, implying progress and strength. They carry the body. In a metaphorical sense, they represent the continuity of thought and life too. And yet they also simply enhance the elegance of the female form. When you look at their detailing too, Huisman-Biemans’ sculptures are exquisitely feminine. Perhaps this is her background in fashion coming to the fore. For many years, the artist purchased exclusive women’s fashions in cities such as Paris, Milan, Düsseldorf and Amsterdam.

The fact that Huisman-Biemans is professionally trained in art is also evident. The clear way in which the long lines are drawn tends towards abstraction, one of the characteristics of modern art. Consider a sculpture such as ‘Ambition’, which consists of three acrobats climbing a ladder. The ladder is a strong shape providing the climbers with a clear framework. Something similar can be seen in ‘Dearness’, a sculpture in which six people are depicted side by side. You see them as individuals, but together they form one silhouette. The artist’s fascination with motion is evident in the couple on a bicycle, captured in bronze. There is a momentum to everything – not just the bike, but also the skirt and other clothing, and the pair’s limbs.

If you look closely, you will identify a third element in Huisman-Biemans’ bronze sculptures: Japan. This could very well be the reason for the tranquillity radiated by the artist’s sculptures. Japanese philosophy of life, often a combination of Buddhism and Shintoism (a religion in which nature spirits play a major role), centres on an acceptance of life. Without claiming that Huisman-Biemans has studied Zen in any great detail, it is fair to say that she admires Japanese culture. One way this is expressed is through her interest in a remarkable Japanese drawing technique. Sumi-e captures the wonder of the nuances contained in a brushstroke, and the richness found in a single mark. It is this synthesis of power and contemplation, simplicity and concentration that can be found in all her works.

Huisman-Biemans graduated from art school with a diploma in three disciplines: sculpture, drawing and painting. She now masters several different techniques and has a marked preference for working in bronze. The strength and therefore durability of bronze makes it an exceptional material. Its great versatility and rich expressiveness also make it an attractive medium. Huisman-Biemans is skilled in making the best use of these properties, playing with the many opportunities offered by the patination of her sculptures. Most of her bronze sculptures have a dark, matt patina. She then uses a lighter patina for the details of garments and other attributes. This makes them so lifelike that you just want to reach out and touch them. Fabrics and hair are given a lively, ultra-fine texture. While the bronze used by Huisman-Biemans is a traditional material, her work is, at its core, entirely contemporary.

Drawings, mixed media in Dibond with Perspex, sculptures in colour

Alongside bronze sculptures, Huisman-Biemans produces other artworks, including ink drawings using various techniques. One technique already mentioned is sumi-e, which results in drawings with sharp outlines and a powerful impact. Huisman-Biemans’ ink drawings are generally produced as independent works of art, though her sculptural work is reflected in them. She sketches characters and situations confidently and with a wealth of feeling.

While black lines predominate in most of Huisman-Biemans’ drawings, she does also employ colour. This is especially evident in her mixed media work (mixed media on Dibond with Plexiglas). These works are a combination of collage techniques and calligraphy. In her inimitable style, Huisman-Biemans depicts situations full of cheerful, agile characters. The works exude energy and a zest for life.

Astrid Huisman-Biemans also makes bespoke sculptures, incorporating the client’s personal stories into them. Commissioned works are also carefully blended into the environment in which they will come to stand. All in all, this is a very special process that can result in an unforgettable work of art for your home or office.