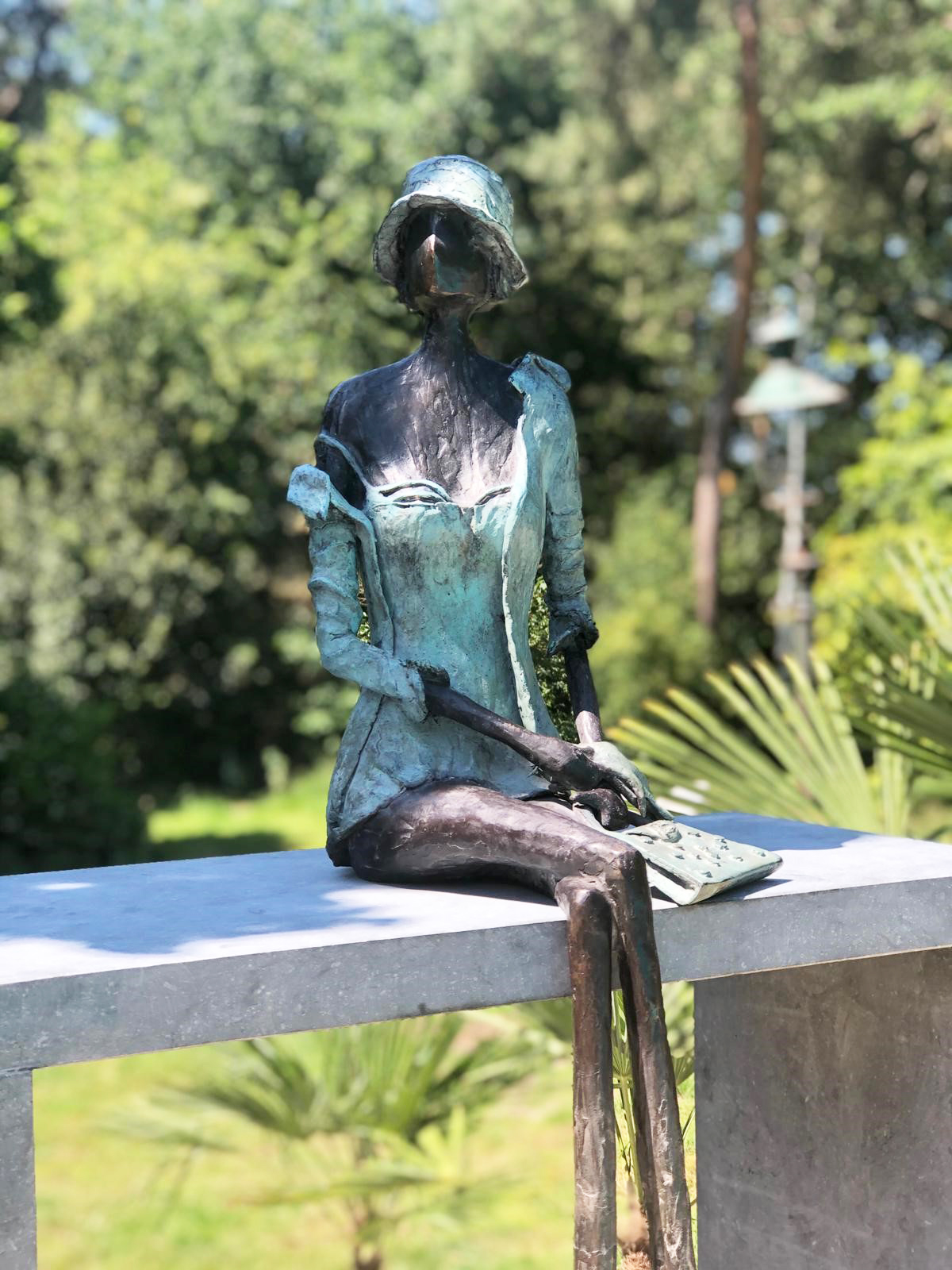 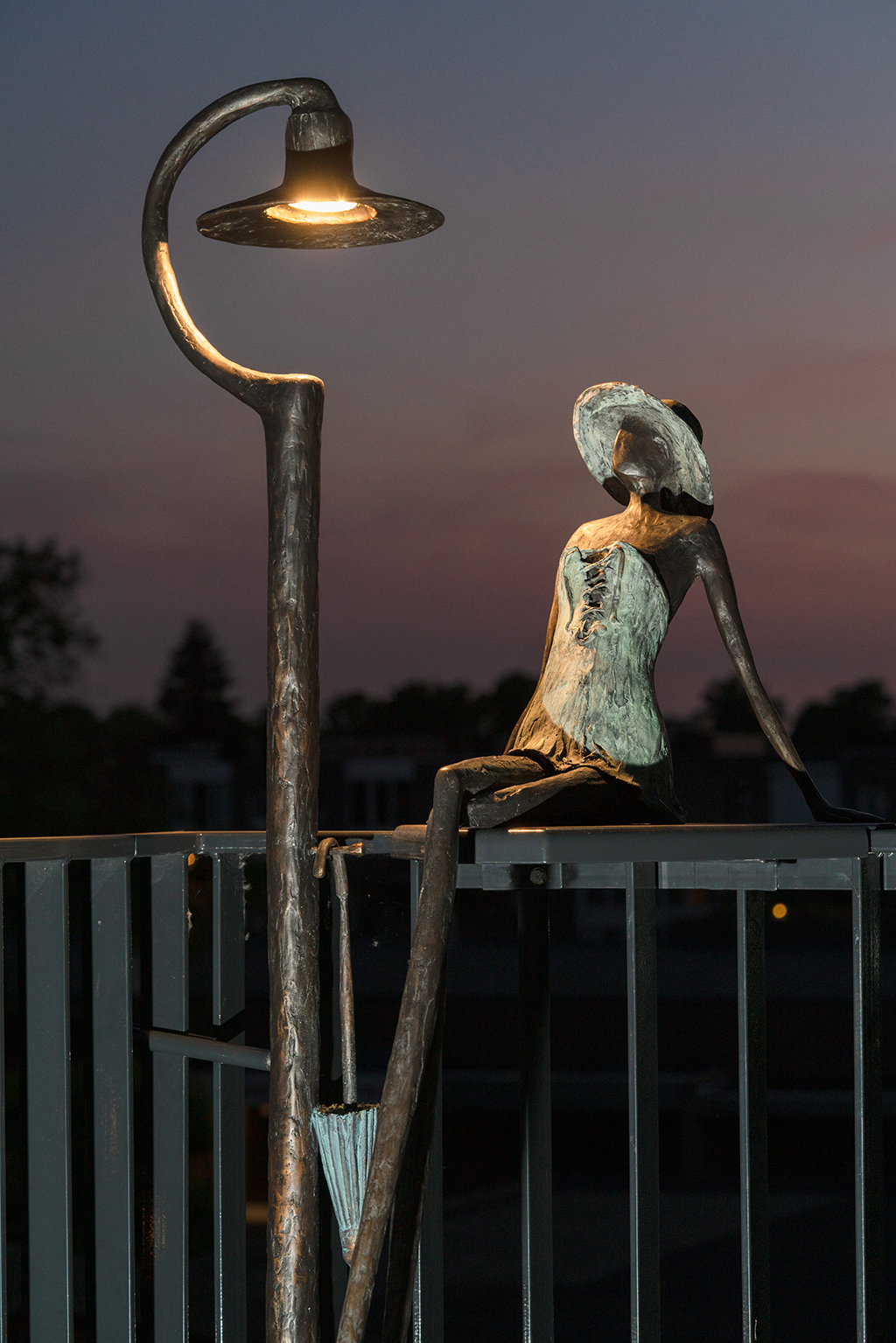 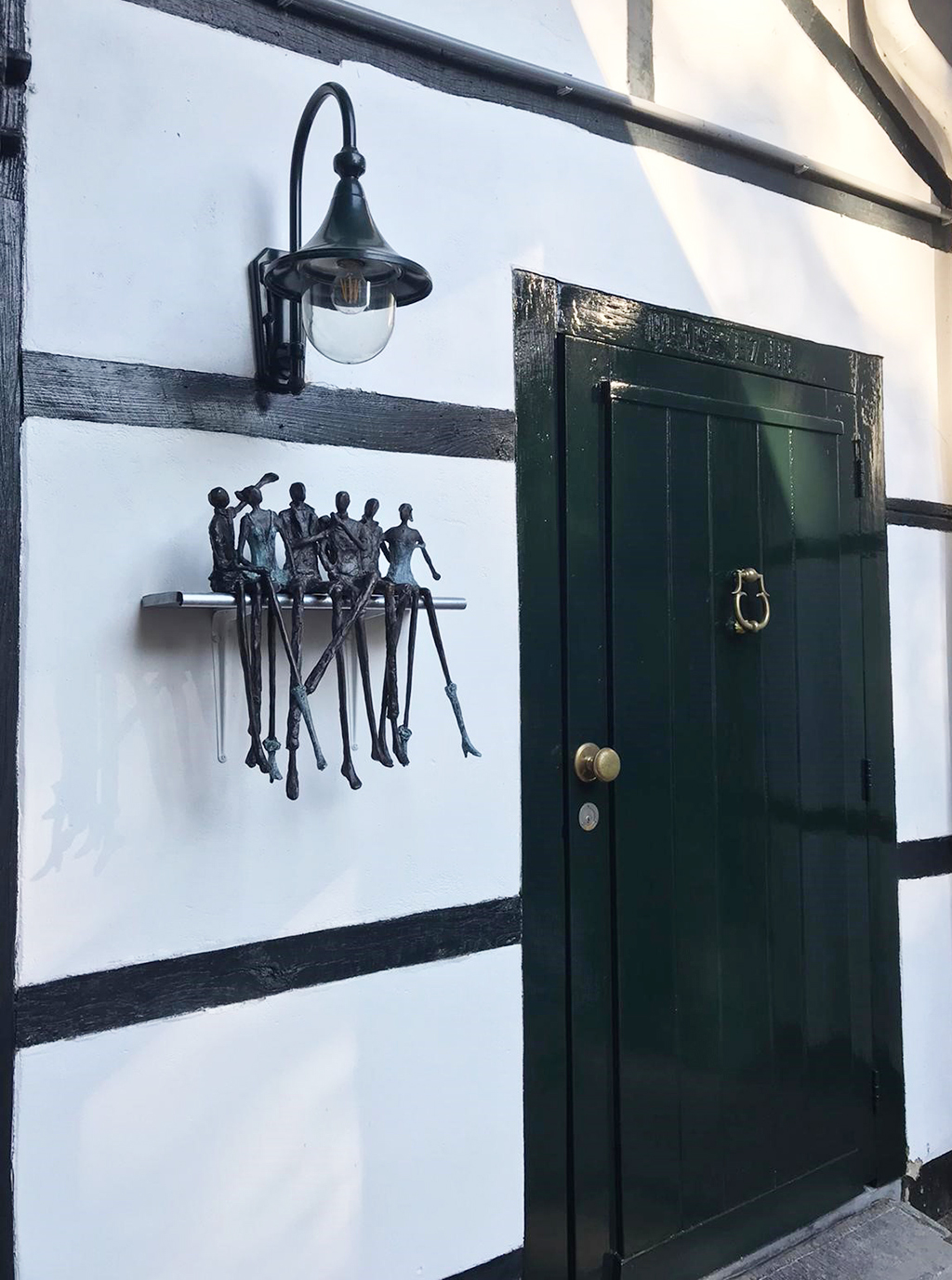 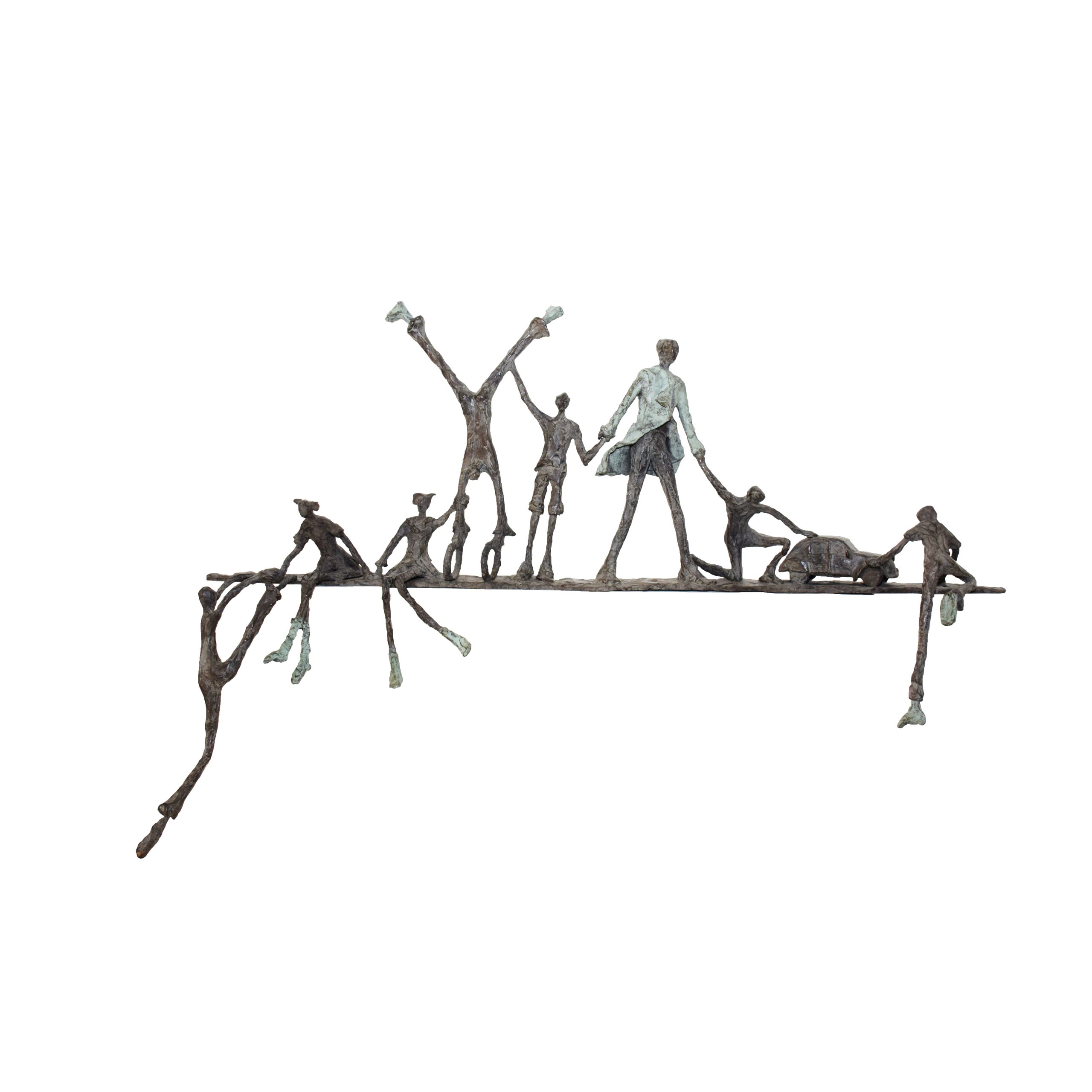 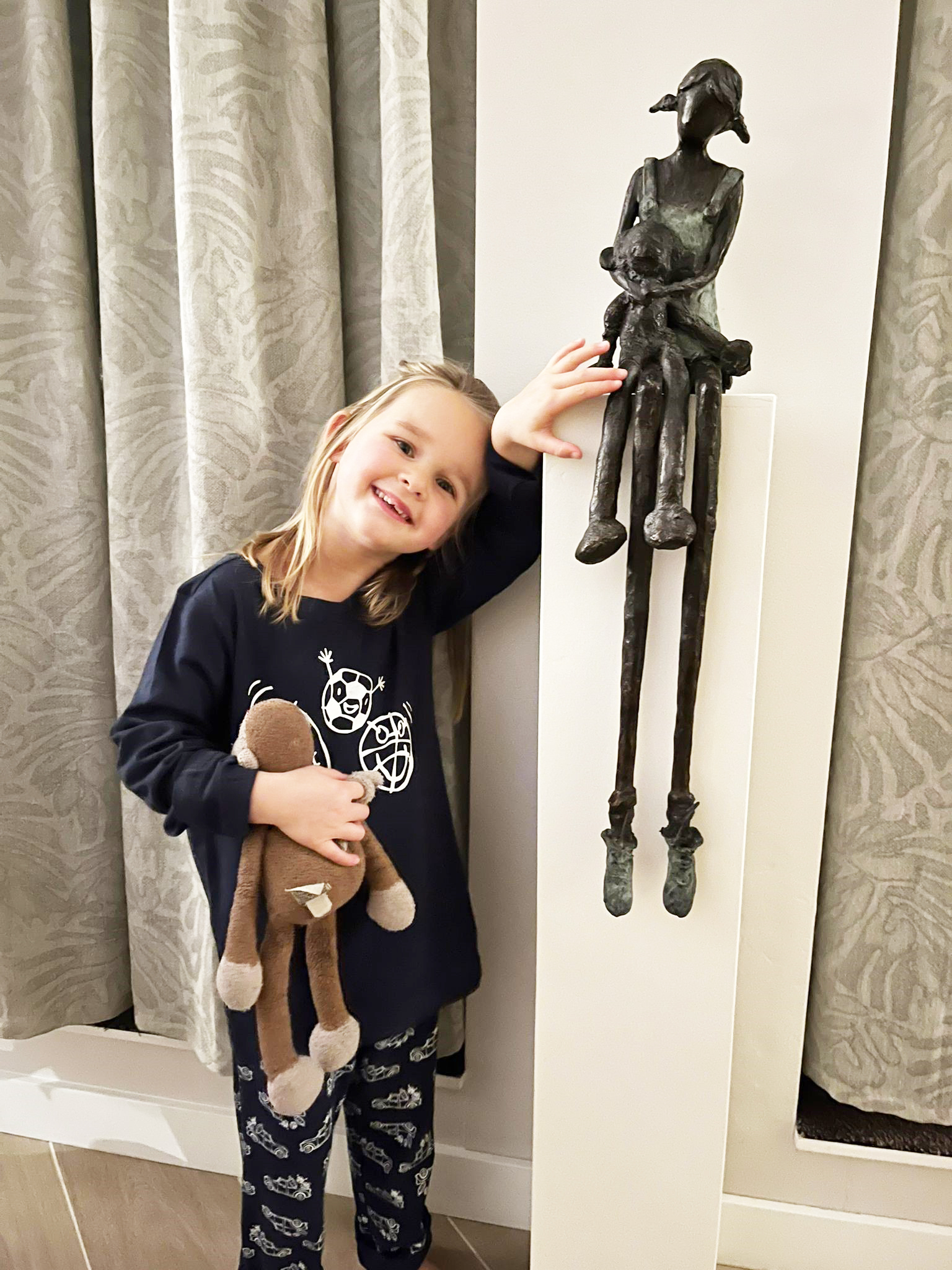 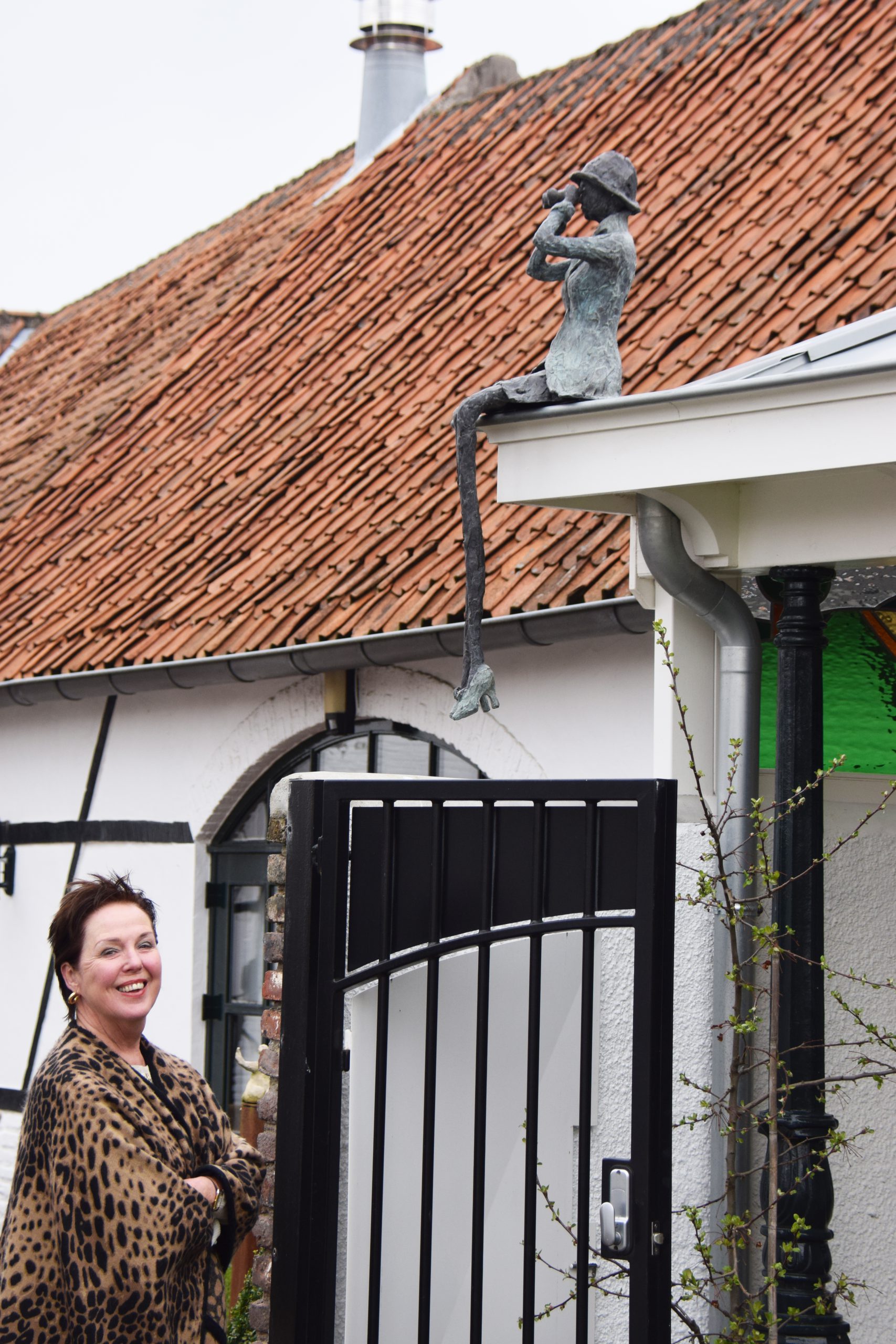 ‘Dearness’ is a bronze sculpture depicting six people (four men and two women) sitting side by side on a bench. Although they are all just ‘sitting’, the sculpture is far from being static. On the contrary, it could be described as a lively, perhaps even ‘active’ image. The men and women are moving their heads, turning to the left or right. They are looking at each other and there is an affectionate interaction between them. And yet it is not only the way they relate to each other and the way they interact that bring the image to life; the play of lines created by the arms and legs also contributes. Just like in a quick sketch, the long lines provide the image with both form and rhythm. As such, this sculpture is an excellent example of the client’s dreams amalgamating harmoniously with the artistic imagination of Astrid Huisman-Biemans.

The commissioned works produced by Huisman-Biemans can very much be included in her body of work, both in terms of style and artistry. It is with great skill and care that she incorporates the client’s wishes into the image depicted, so much so that the client has no trouble recognising his or her story in both the atmosphere and the details of the sculpture. This is even the case if he or she was unaware of the creative process, as in ‘Dearness’. ‘Dearness’ was made as a surprise, commissioned by one of the six siblings depicted. He wanted to surprise the others with a sculpture illustrating their togetherness and the warmth of their family relationships. Even though all six have long since flown the nest and have their own lives, they still share a close bond. This feeling is expressed by the one raised arm of the brother sitting on the far left. This gesture indicates that he is embracing everyone else sitting next to him. Elsewhere, the details of the siblings’ personalities and interrelationships have been incorporated into the shapes, colours and types of the attributes shown: the sisters’ jaunty high heels, their dresses, and the one sock falling down. They are also expressed in the details of the men’s all-season clothing, and how a hand is held. So, ‘Dearness’ is more than just a sculpture; it is a work that took shape through close collaboration with a client.

A second sculpture that serves as a good example of bespoke work is called ‘The power of eight’. This is also a beautiful composition that brings together various individuals, all of whom are different but nonetheless connected. These are eight young adults with disabilities, all living in one residential unit with their carers. The parents of one of the young people featured wanted to celebrate and illustrate the specific nature of this togetherness. This special sculpture, which is primarily a response to the possibilities and fun the residents have, came into being following discussions between the clients and Huisman-Biemans. The additional support the young people need is not an impairment but instead a strength expressed both mentally and physically. In the sculpture, this is symbolised by a circus performer happily balancing on two wheels.

These examples show that Huisman-Biemans is more than capable of responding to a range of human situations well. Collaboration and discussion with clients result in varied and dynamic sculptures that not only amply express the client’s wishes but also function extremely well in the environment described, whether that be an office, a garden or a living room, or perhaps a flat roof or the front of a house.

Story variety and subtlety are also evident in the sculpture entitled ‘Dikke Neel’, which depicts a charming and striking woman and her extraordinary life. The title, which means ‘Fat Neel’, is her husband’s pet name for the woman; her real name is Cornelia and she is far from fat. Her personality and the events of her life are all contained in the image in different ways. Her jacket very proudly displays some strips of material – a reminder of the wholesale fabric business she and her husband used to run. The jacket has five buttons, symbolising their children. Their grandchildren – all 13 of them – are represented by dots on her bag. Cornelia’s children and their spouses cherish this sculpture. “She is the patroness of our property.”

In addition to family and life stories, Huisman-Biemans incorporates stories about and memories of children into her art. This has led to a series of commissions, with ‘Friends’ as the first. The figure is of a sweet girl with a cuddly monkey. It was commissioned by a man who wanted to give his new-found love a sculpture as a gift. This became an image of her and her cuddly toy, a vivid childhood memory. On seeing it, one of the woman’s grandmothers immediately recognised her young granddaughter in the sculpture. This led to a commission to make a similar sculpture for all her grandchildren, one with a bear, another with a bunny … You only have to think back to your own childhood to realise how meaningful such memories of a child with a stuffed animal can be.

The process for the creation of bespoke work relies on intensive collaboration and goes through several stages.

In the first stage of the process, Astrid Huisman-Biemans explores and identifies your wishes, starting with a good conversation. Anecdotes, memories and short stories stored in the memory long ago usually emerge during such discussions. Small gestures, habits or personality traits can also be incorporated into a design in an inspiring way, ultimately serving as a foundation for the final artwork.

What comes out of that initial conversation will be discussed with you. The commission is defined, not just in terms of content but also in relation to the artwork’s format and the material to be used. Attention is then paid to the work process.

Based on the usual work process that goes from design sketch to sculpture, a plan of action is drawn up. This covers the following:

On completion of the artwork, you will receive a certificate of authenticity.

If you would like more information about the creation of bespoke artworks, please get in touch using this link.